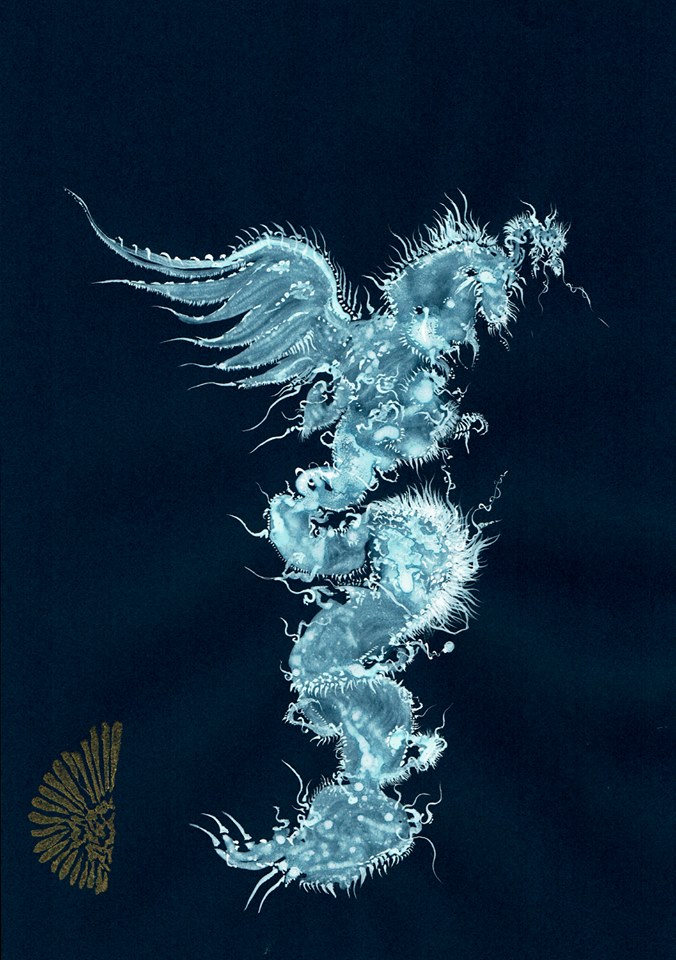 The Shape of Life

A body of light, resplendent: this work of Mehata Hiroshi astonishes at first by its radiance. The forms seem to twinkle before our eyes, as if they were illuminated from the inside and radiated an energy of fire outward.

The curves draw a dragon, its mane, its wings, its claws. Yet there is nothing frightening about it. Instead, it creates an impression of strength and gentleness. The bluish color and the light undoubtedly give an effect of power, but of a fully mastered power. The artist’s explanations clarify this impression: what he presents to us here is nothing but the pulsation of Life.

“Earlier this year, he says, I visited a lighthouse by the sea, it was by night and I experienced being immersed in the black roll of the ocean. The waves roared and completely filled my ears. The vision was a single tone like a black dragon was writhing. This experience inspired this work.”

The series Shadow-noum nega brings together spiritual images that are trenches in the depths. In this specific work, the wave that emerges from this single underlying tone represents our spirit. As Hiroshi explains, “the mind sails on the surface of our interiority and the sounds that circulate inside are like a music that turns on itself in the mind, playing in a way with its own memory. If we remain silent, we can hear the sounds of this memory in our hearts. Their shape is not clear. However, it is the common element in the life of this universe and it is the root of life. Blue represents the deep sea, white symbolizes the purity of heart as life in the depths of the ocean. In these depths, life as well as death are fully welcomed and all that the senses capture becomes a music which plays the harmony of the totality. This flowing energy, this rhythm is like the pulse of the whole life of the universe”. 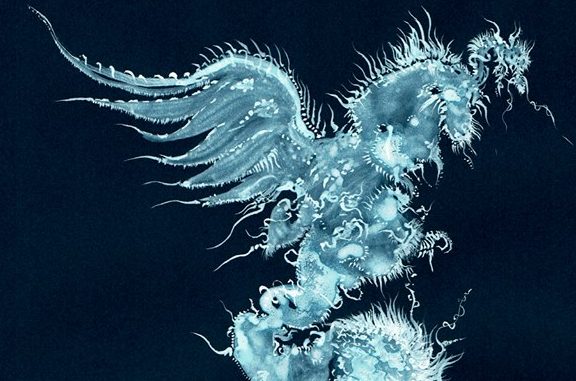 The dragon in this artwork finds its roots in the East where this fantastic creature traditionally represents the vital energy of the universe. The dragon thus embodies the flow of the atmosphere, in other words the breathing of life. The dragon also symbolizes the very root of life. It is, in Hiroshi’s words, “a deep ocean in space, in the womb: it represents the original form of the baby growing in there, the process of evolution of life. Fishes, birds, reptiles and mammals all have this in common. The moment when life is born, the energy of that precise moment: that’s what I’m trying to capture”.

Thus, what this work shows us is not a dragon but the very energy which is at the source of the imagination and which concretizes in the form of this animal the flux of life. For Hiroshi, we have called ‘dragon’ what is in reality a movement of energy, the shape of which is never the same and is constantly changing.

This work crystallizes the light and its perpetual flux. The subtle flicker that Hiroshi seizes has something of a miracle: he succeeds in grasping in an artistic gesture a moving energy without losing its quality. Shadow Noum Nega concentrates Life: its movement in its immobility, its purity and its elusive magic.