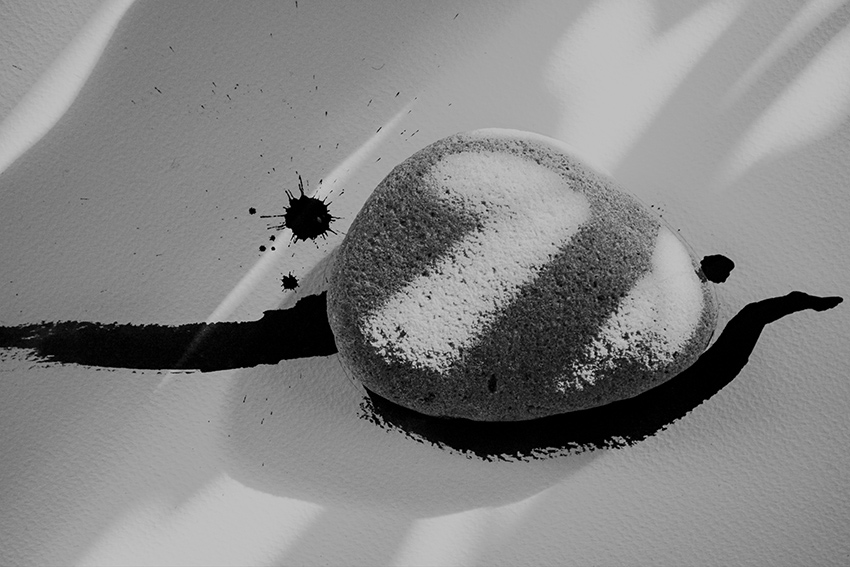 The river and the stone

In this series, Gonzalo Bénard explores once again the connection we have with nature, or, more accurately, reveals a bond that we have long forgotten.

The effective power of a stone, the genuine reality of the flow, the strength of the elementary world, these are the energies the artist works with to make them visible and tangible.
The genesis of ‘Meditations of stones’ is quite inspiring and Gonzalo beautifully gave us an insight into his artwork, its meaning and its intensity:

“I’ve been collecting stones, or big pebbles, from a beach nearby that is filled with nature’s, rounded and shaped by the ocean in all its natural diversity. All day under the sun, with the ocean waves washing them over and over, all night under the moon, they are incredibly charged with nature’s most pure and powerful energy.

A day came that my disciple, tormented with some issues from his past, asked me a simple question: “How do you overcome obstacles?”.

I started then guiding him through meditation, transcendental meditation, so we could learn from our inner silence. After some time, I stood up, and I spread these thick papers for painting covering the floor. And bringing the stones, I piled them next to us. I instructed him to lie down over the papers, while I prepared the Indian ink, and the Japanese brush. 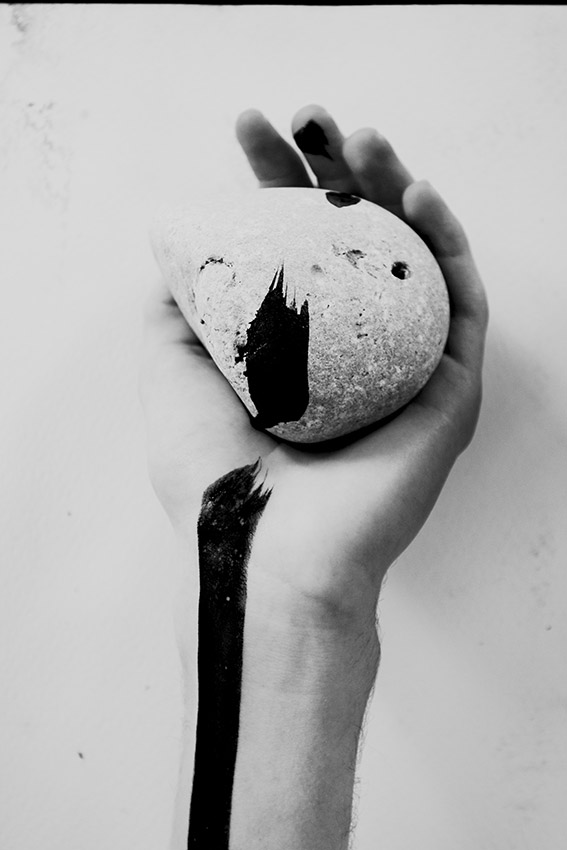 The Indian ink is made with natural elements, and with its liquidity it flows incredibly well, like the waters of a river. The Japanese brush can handle large quantities in its body, leaving just what we want by the pressure that is exerted on them. Still in meditation, I focused on his body looking for a physical obstacle: his lungs were cramped in his small chest, making it difficult to breathe for him. I focused then on the stones, I picked the one that I felt had most energy, and placed it over his chest. And picking the stones one by one, I placed them where they would lead me. One on his hand, another over the paper next to his chest, and another again, I placed all the stones over and around him. By doing this, I was transferring the energy of the stones to him, under meditation, doing a shamanic healing practice.

When done, I told him that we can always find the best answers from nature if we pay attention to it. And to overcome obstacles, we could just look at a river, and how it overcomes its own obstacles by embracing them and letting them go. More than that, by embracing them, the river polishes the obstacles so the waters afterward have less and less effort to overcome them, leaving a clearer path to others. By embracing the obstacles we are accepting their own existence, allowing ourselves to learn from them, growing up, getting stronger, moving on. 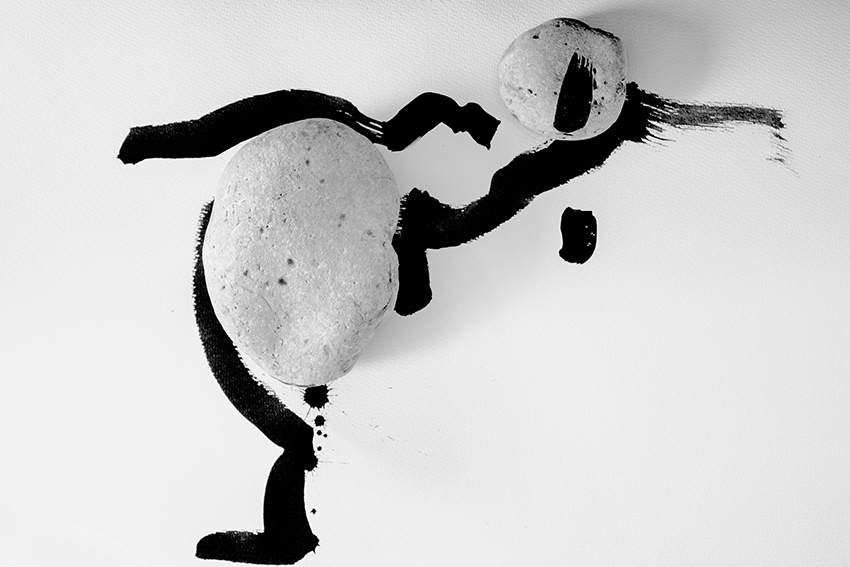 When I placed the biggest stone over his chest, for a moment he had the feeling that the world weighted on his chest. Weight that becomes energy which was absorbed by him, creating new space, renewing and recycling energy on his own chest. 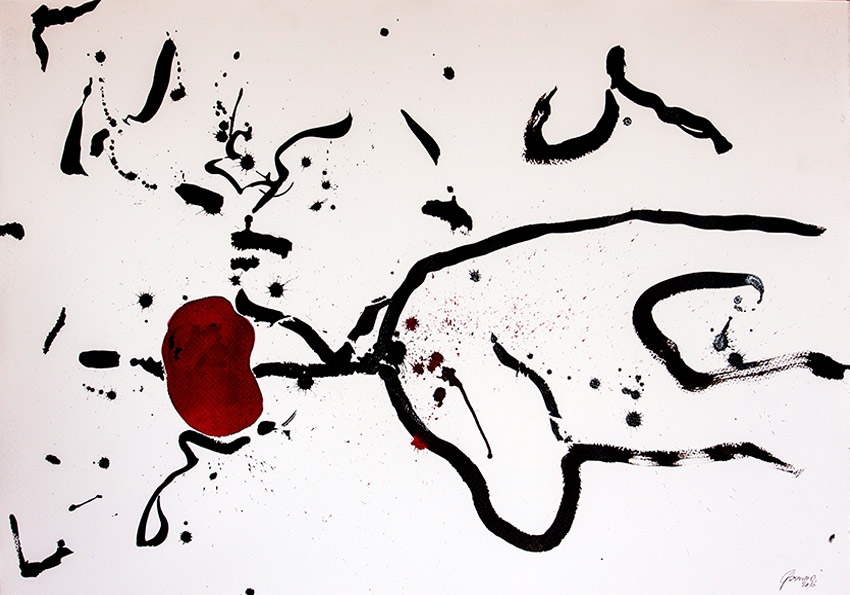 After preparing the ink in a big bowl as part of the ritual, I placed the Japanese brush on my hand as if it was a natural part of my arm, so the Indian ink could flow as my own blood, which now would be a river… I become myself a river then, while he was the obstacle, so I started flowing, all around just guided by my senses, following the energies, embracing the rocks and the body over the paper that was the ground. I found myself as river some easier and some harder obstacles. Some harder to embrace, or to polish. But I was letting it go, if the river couldn’t flow on one side it could turn back and go through another side. We experiment life until we let it go the best way. Creating new paths, leaving new trails, embracing the obstacles, and letting them go.

This shamanic healing took some time so we could both learn and feel, feel and learn. He was earth, I was water. And by balancing the elements, we became also fire and air 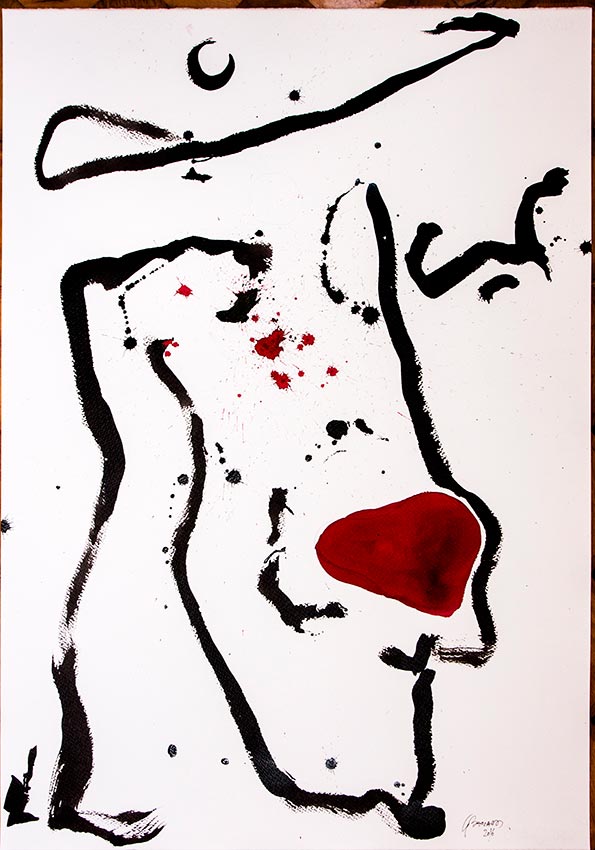 It was also a private art-performance under meditation. A moment of learning with nature and with each other. Sharing the elements, healing by being ourselves stones and rivers. Being living bodies ourselves.

At the end, I collected the stones, and when I took the big stone from his chest, I also took away the weight he felt, making him breathe the air with enlarged lungs by the heat of the fire, by embracing and overcoming what was once an obstacle. Since then, he has had no longer problems breathing as his chest has become wider.

After the whole process was over, I took the camera and took photographs to document it, so I could share with others who often wonder “How to overcome obstacles?”.

At the end, Gonzalo Bénard had created this series of photographs and painting. The black Indian ink as memories of a body, the red as memories of an obstacle that no longer existed. As we balance our own elements of nature, becoming water, air, earth and fire, accepting and embracing the obstacles by becoming a river, we experiment our true power. As Gonzalo beautifully said:

“At the end, he was healed and we had become one with nature.”