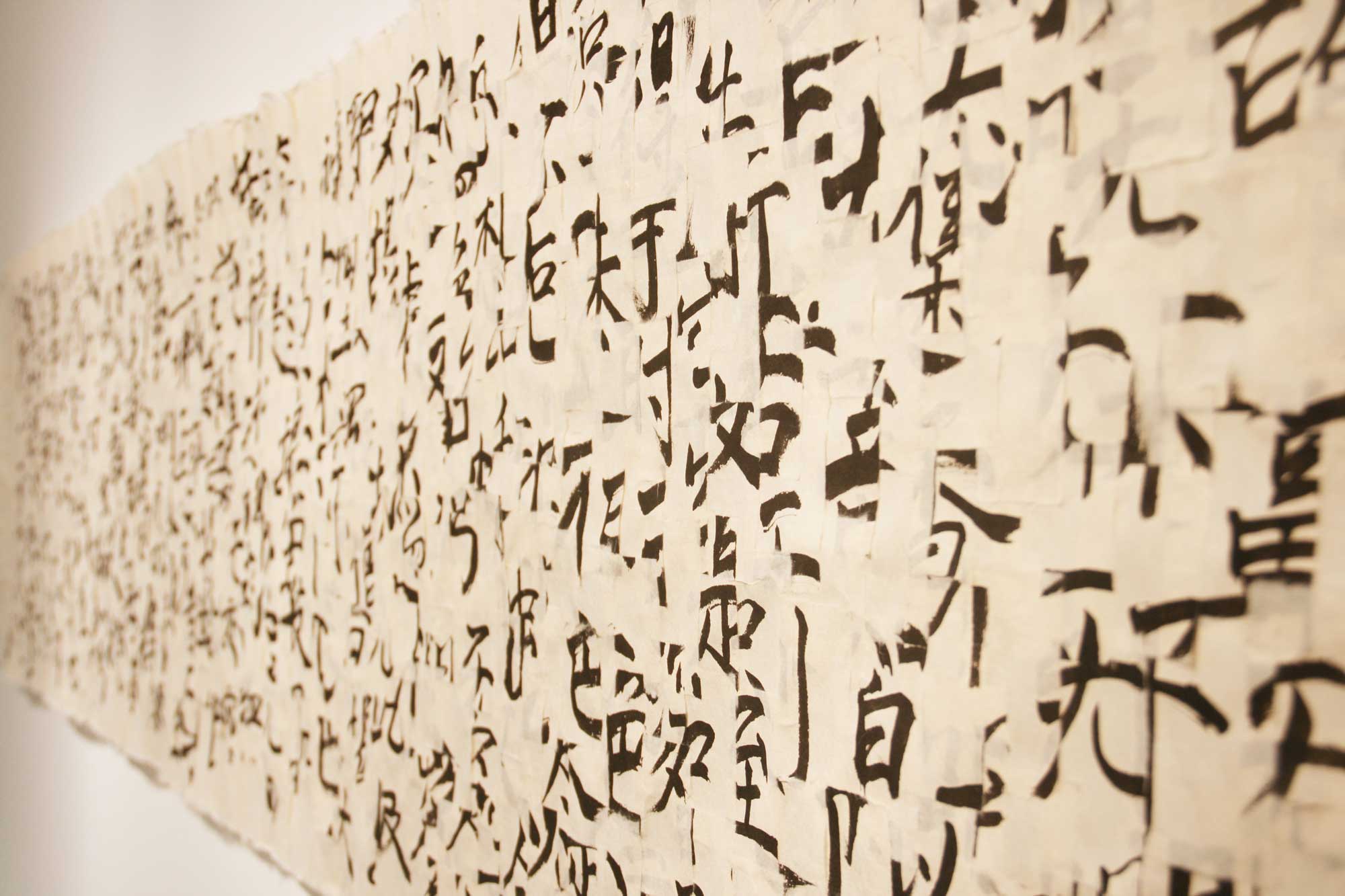 To the other shore

The Heart Sutra, originally a very short set of verses, was given in privacy specifically to Sariputra, one of Buddha’s close disciples. Over time, the Heart Sutra became one of Buddhism’s core teachings.

As a Chinese artist, Han Zhang was required to practice writing traditional Chinese calligraphy in school like, in her generation, most children who grew up in China were.

“When a child practiced calligraphy, he or she was often given an ancient poem or Buddhist script to copy. The Heart Sutra is a very commonly known and famous Buddhist script, and it was also the first script that I wrote down when I practiced for calligraphy”, she explains. “At that age, I had no comprehension of the meaning of the script. As I grew up and kept practicing calligraphy, every time I wrote down the script, I learned something new about it. The meaning of the script evolved over time as I evolved as a human being and a spirited artist. My artwork centres on the question of language, interpretation and translation. For me, language is both an intimate component of my self as well as a crystallization of world knowledge and wisdom. Any classical script contains a world in itself, and our relation to language requires our interpretation and unpacking of the world hidden behind the words”.

In her “Chanting the Heart Sutra”, Han meditatively wrote down the Buddhist script Heart Sutra on a long sheet of handmade paper and as she says, tried to embody herself in the spirit of the text. However, as she wrote down each word, she also realized that « each symbol cannot carry the full meaning of what it signifies ». To find the Heart Sutra’s Truth and its wisdom, one has to go beyond the written words: Han deconstructes and re-configures them into something new. In that sense, her artwork questions the limit of language in conveying the spirituality of meaning and the possibility of interpretation: “Meaning does not exist in one word, but it does in between words. There are always gaps between what is read and what is understood”.

“Chanting the Heart Sutra” superimposes the different interpretations she had overtime and demonstrates the evolution of her understanding of the script. Here is how she describes the whole process:

“First, I wrote it down meticulously in the same way I did when I practiced calligraphy as a child. This stage represents my initial understanding of language for its surface meaning. Secondly, I tore down the calligraphy into small pieces, as if I was lost in the vast meaning of the text. Lastly, I tried to recompose all the fragmented pieces into a complete piece again, representing my personal search for the meaning of the text—this time, a deeper interpretation and a more intimate connection to the spirit of the script. The final artwork represents both the fragmentation of meaning and its wholeness, held together by the spirit of language that is ambiguous and personal in nature”.

This piece of work entirely springs from the elusiveness (je veux dire caractère insaisissable) of the meaning and, when it comes to this specific script, the irreducibility of its wisdom which is impossible to target through language. Doing so, her artwork is an attempt to express beyond words and mental grasp, a meaning one’s has to live and experiment. She comes close to an inbetween lines truth, as a totality and a surpassing of this totality. The remaining calligraphies appear as fragmented, however on its visible side only. Going beyond the ‘seen’, one can apprehend the other shore, which is precisely what the Heart Sutra is about: losing the meaning of the words to have access to a deeper world – which art opens our way to -, to a deeper truth. The title itself expresses the performing power of this artwork: “Chanting the Heart Sutra” is on its own the very act of chanting, that means letting go the will to understand and opening up to a beyond, trying and going through fragmentation to find oneness, where subject and object no longer exist.