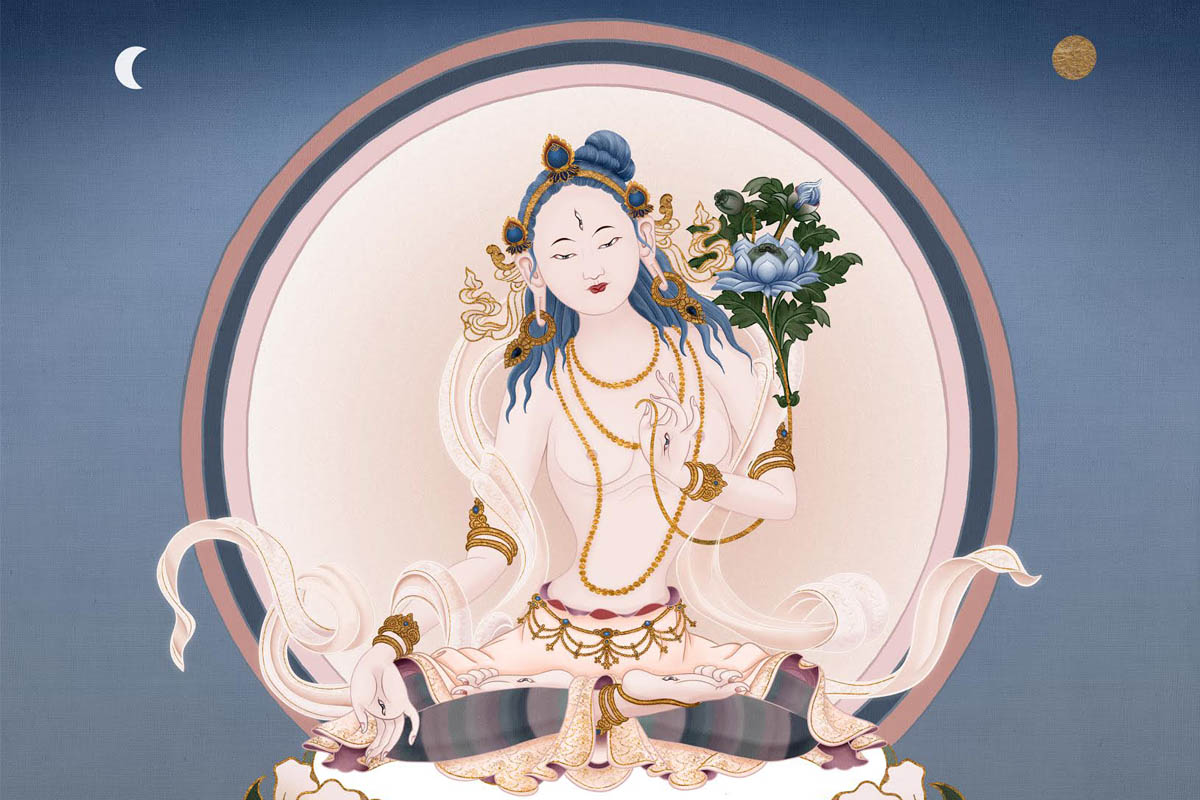 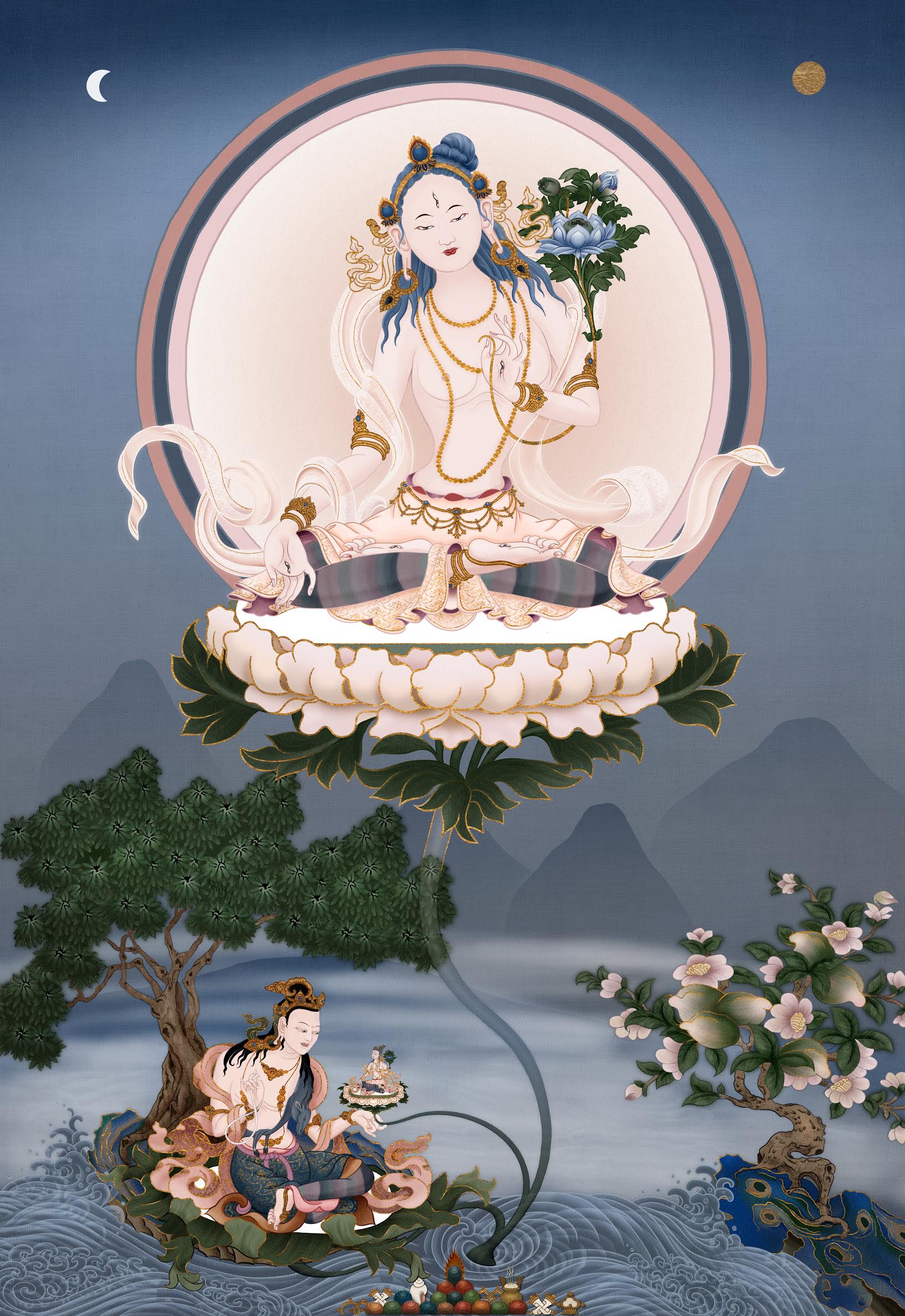 The power of this Thankga named « Sita Tara and Avalokiteshvara: Wisdom Born of Compassion and Uniting Three Spheres » is not just about its beauty or perfection as a piece of art. It has the ability to transform your inner being.

“Behind each aspect of the image, each gesture and landscape element, there is a meaning. That meaning is profound. It is not just about understanding something conceptually; it is about actual realisations. You are painting an object that can be met with the mind directly… and states of mind that the viewer can reach. If the viewer’s mind is sharp, and their heart’s motivation is correct, then for that person relating to the image can be the same as relating to the Buddha. If you have the thangka on the wall you have the Buddha in the room. In that context the representation of a Buddha’s body is immensely profound. The object is empty of inherent qualities: depending on the viewer the image exists in a spectrum from something that is worthless to something that is the most precious object in the world.”

This Thankga represents Tara in the white form in which she is often seen to embody compassion and long life. In Tibetan Buddhism, Tara is both a Bodhisattva and an Enlightened Being. Sometimes known as the Mother of All Buddhas (because the perfection of wisdom in meditation is what produces or “gives birth” to buddhahood), Tara is also considered to be the Spiritual Partner of Avalokiteshvara. Her name means both star and saviour: the Sanskrit root tar, to “cross over”, refers to her ability to defy ordinary death, and to go beyond the ocean of forced rebirths to conscious enlightenment. Success in White Tara’s practice may bestow long life. A Tibetan story tells how Tara was born from Avalokiteshvara’s tears: when he arrived at the summit of Marpori, the ‘Red Hill’, in Lhasa, he realized the suffering of myriads of beings, undergoing ceaseless torment. This was such a terrible awareness that tears sprang from his eyes. From his tears of compassion fallen on the ground, two forms of Tara were born: a peaceful white one from the left eye, and a fiercer green one from the right.
The artist describes his artwork with these words: 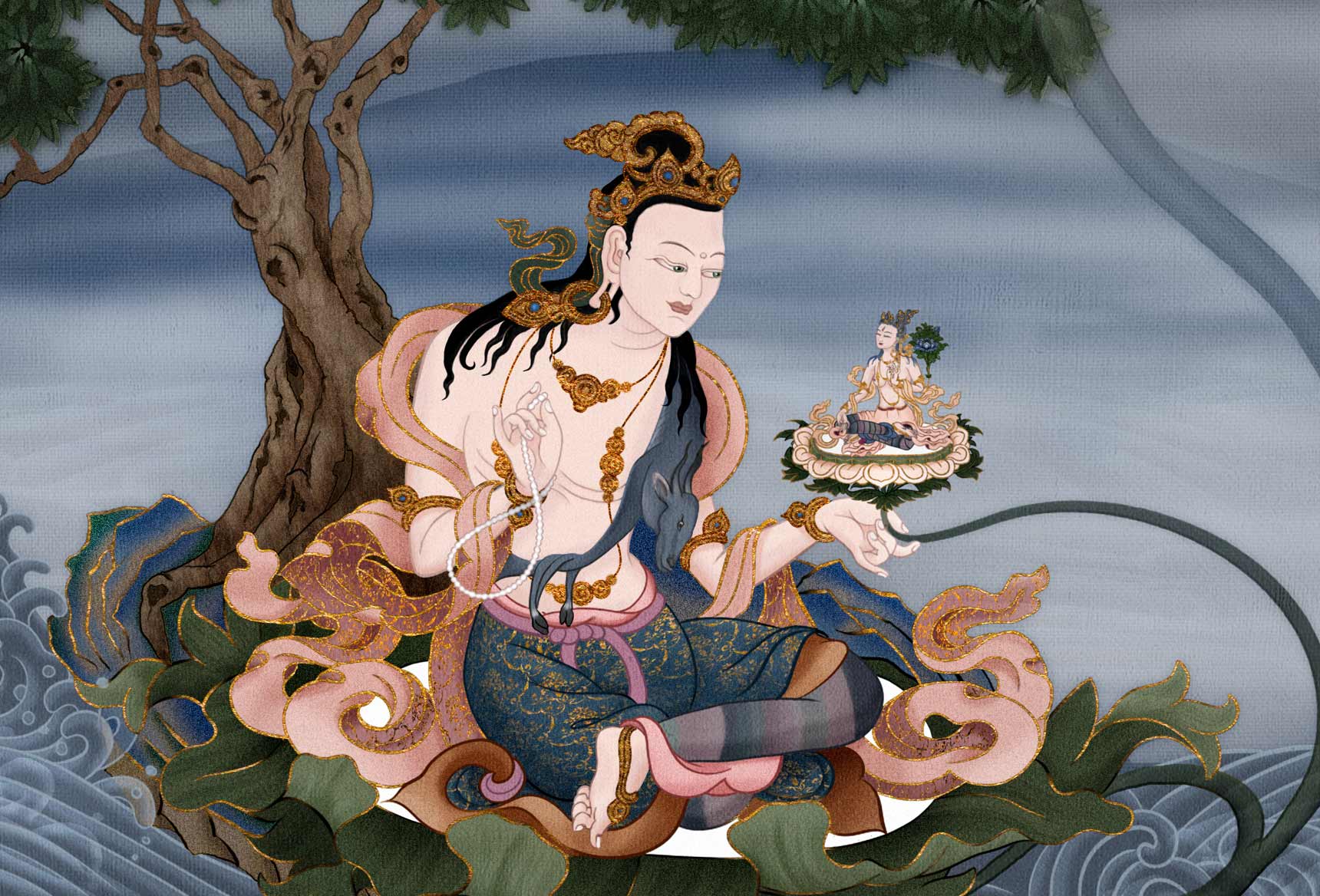 “Holy Sita Tara sits atop a gently floating lotus and moon disc, tranquil, and radiant as the midday sky. Beneath her a veiled mountain range beckons through a summery haze. Gleaming white and iridescent, like the orb that surrounds her, Sita Tara peacefully surveys all beings. In her unwavering compassion, she bears loving witness to whatever arises… as if her wisdom sees directly a blissful reality that cannot be harmed by fleeting appearances of pleasure and pain; success and failure; stability and volatility.
Below, Avalokiteshvara Bodhisattva sits under a tree in half-lotus posture. His loving eyes gaze upon a much smaller Sita Tara, who is visible at the level of his heart. Fast-flowing waters born of his recently wept tears slap against the rock-like formation upon which the bodhisattva sits. A sense of urgency imbues the swift current; yet, above it, Bodhisattva Avalokiteshvara and Sita Tara abide serenely. Indivisible, untouchable, and seemingly outside time they appear to be poised at what TS Eliot calls “the still point of the turning world”. Enshrouded in the ambrosial air, secure above the swirling water, these exquisitely embodied, compassionate companions gaze upon one another in a landscape of dream-like otherworldliness. Blissfully quiet… appeased… complete. In a realm of luminous clarity, Avalokitehsvara and Sita Tara meet in an infinite dance of purity that remains available each moment”.

In this artwork, Jampay Dorje represents “three spheres”: the sphere of the seer (Avalokiteshvara), the sphere of the perceived object (Sita Tara), and the sphere of seeing, visually represented by the sea of tears. “Each “sphere” arises from one of three stems attached to the same water-born lotus”, Jampay explains. “There is no path, no travelling on the path, and no traveller on the path that could ever exist separate from the virtue of the wish to become enlightened for the sake of others. Rather, it is the wish to become enlightened that plants the very seed that ripens into the fruit of wisdom. Thus Avalokiteshvara’s compassion causes wisdom to arise in the form of Sita Tara. In Sita Tara we see the reflection, the result and the personification of his compassion”. 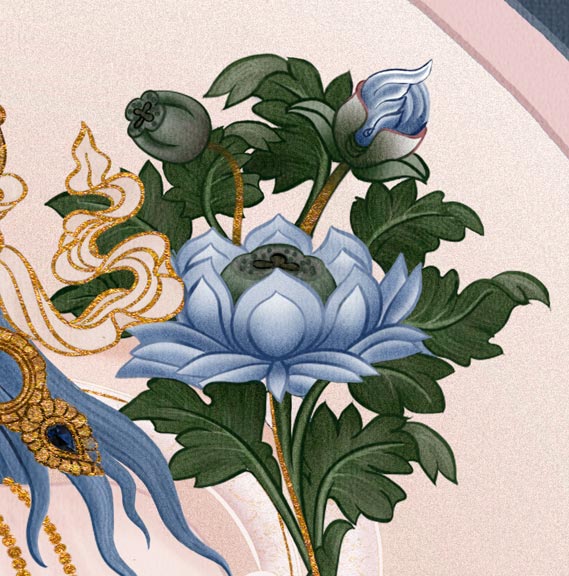 This artwork shows the interdependence of everything: each apparently separate element is bound together. Sita Tara and Avalokiteshvara’s united activity represents the wisdom born from compassion’s powerful surge which opens our heart. Sita Tara symbolises the purity of our own altruistic love for others. The most loving wish of our hearts gives birth to Tara who embodies this very energy.

At the same time, this artwork in itself concentrates and performs the same energy: the artist appears as a channel and his artwork as the genuine expression of an ongoing enlightenment. Witnessing this process on a double scale – the represented scene as well as the act of representing it – the viewer becomes entirely part of it. In that sense, relating to the image can be the same as relating to Tara’s universal love. This Tangkha can transform sentient beings who realize the three spheres as they relate to all phenomena and to themselves. In representing Tara, Jampay Dorje offers a unique opportunity to plant seeds that will ripen into authentic paths to enlightenment.

Whispers from the plants

Whispers from the plants