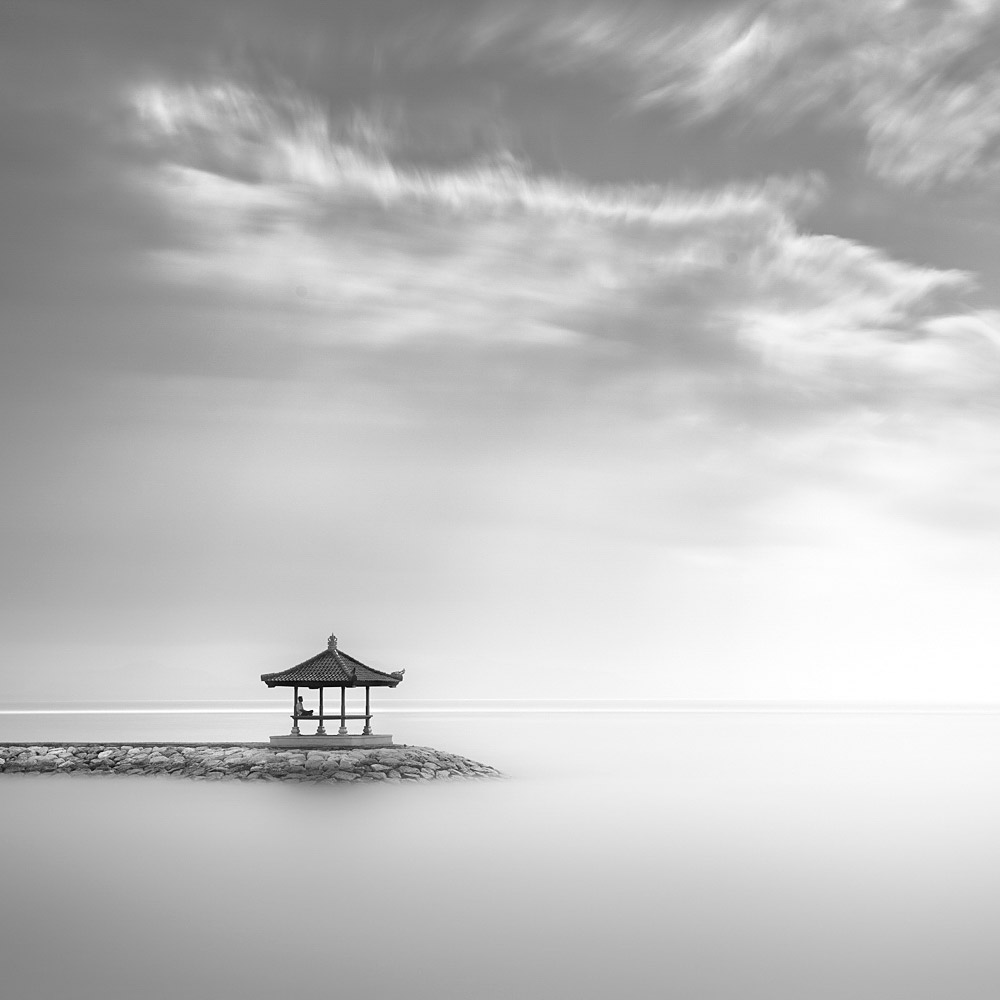 The serie “Detach” is all about coming back to the essentials, away from the noisy world and its diversions. Hengki Koentjoro’s photographies capture here “a refuge in small moments”, a kind of breakthrough, a detachment from the disturbances of the world.

“Detach” #10 brings out a state of deep serenity. In the midst of a smooth white sea, someone is meditating under a small pagode as if lost in the universe and paradoxically, at the same time deeply connected to infinity. The use of black and white widely contributes to the accuracy of the lines that conveys this powerful feeling of inner stability and harmony. “I use BW because I like to separate myself from the real world and into to the surreal world, with BW I can freely express my idea clearly. I like to play with shapes, lines as well as texture and compositions. Only in BW will these elements stand out without distractions”, said Hengki.

Such photographies have for me the strength of insight, very close to Pascal (from his Pensées #136) that it worthy of a lot of meditation:

“I have often said that the sole cause of man’s unhappiness is that he does not know how to stay quietly in his room”.

The photographer’d rather choose the spirit of Haiku as a background for his artwork: “I usually look for scenery that embodied the spirit of Haiku. Haiku is a Japanese poem that is accompanied by an image that portrayed nature that is done in a minimalist style. Usually this image is Japanese painting with traditional ink and brush. Haiku is about senses; what you see, hear, smell, feel and taste. In photography we deal more with the feeling, mood, nuance of the atmosphere. What I seek is a photo that deals with negative spaces, empty space that is filled with a single object. The atmosphere of minimalism is of the utmost importance.”.

One of Basho’s haiku would then perfectly match with this picture of such an euphemistic atmosphere.

to see lightning and not think

As an haiku poet, the photographer strives to quicken all his senses so that he becomes one with the landscape: the picture then catches this fleeting but supreme moment of communion and connexion and gives us the chance to experiment, through his art, a moment of deep contemplation and gain a sense of a transcendent realness. Hengki’s art, like this kind of poetry, achieves what he speaks about: detachment. Withdraw anything superficial or useless, focus on the essential, drop any distraction: simplicity there is the key word. Because, as the artist states: “less is more”.