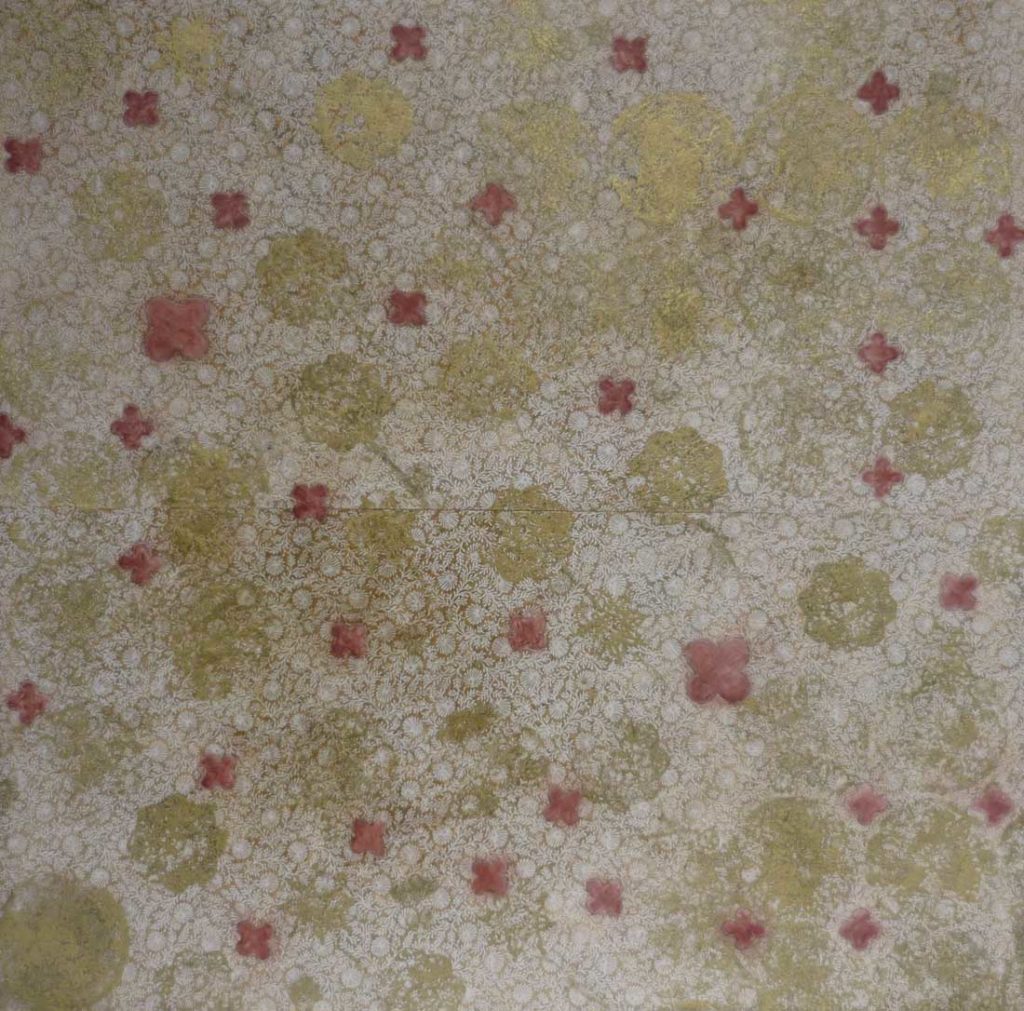 Alain Guillon paints the vast majority of his pictures after meditating to music or inspired songs in order to nourish his inner silence and what he calls his “vibrational song”. In this article he shares his discovery of Hildegard Von Bingen and says how the voices of silence are a source of inspiration in his painting.

I discovered the existence of Hildegard Von Bingen by purchasing a small booklet collecting poems of mystical women of the Middle Ages. As usual when I have no more books to read, I head off to the shelves of a bookstore. I need a book, or several, but I don’t know which one or which ones. So I search until a title or a cover catches my eye more than others. It is a first link created with the “treasure” sought, and when I take the book in hand, I feel (or not) intuitively that it is the one that will meet one or some of my expectations. There is like a soft and warm energy, which passes from the book to my hand, which confirms to me that this choice is the right one.

And it was the right one! Because this booklet also taught me that this great mystic was also a composer… and her music brings me a lot in my work as a painter, since I do my paintings after meditating to inspired music – like the painting “Beatitude n ° 14 created after meditations to songs composed by Hildegard Von Bingen. Some of the songs she composed led me to this deep and infinite inner silence during meditation that leaves us out of time. Who was this surprising woman? A woman of great learning, most sensitive and selfless. A woman passionate about life, captivated by her biological, astronomical and artistic research, all stimulated by her spiritual strength and her quest to understand the elements and the world in a global sense. A quest driven by her faith, her curiosity and her desire to contribute to the well-being of others.

Hildegard Von Bingen was born on September 16, 1098 in Bermersheim vor der Höhe, she was the tenth child of a noble family. At a very young age, she experienced mystical visions – she will say later that she was touched by divine grace at the age of three. Her parents placed her, at the age of eight, under the tutelage of Jutta, the Mother Abbess of the Benedictine convent of Disibodenberg whom they entrusted with her education and instruction. Hildegarde will take her perpetual vows at the age of 15. When Jutta died in 1136, Hildegard was elected Abbess of Disibodenberg by her sisters; she was 38 years old. In 1150, at the age of 52, she founded the Rupertsberg Convent with twenty nuns on the Rhine opposite the city of Bingen. She thus freed herself from the weight of the authority of the Father Abbot of the Benedictine monastery of Disibodenberg on which the small Benedictine convent depended. In 1165, she founded the abbey of Eibingen. She died at 81 years old on September 17, 1179 in Rupertsberg, near Bingen. In October 2012, she was declared “Doctor of the Church” by Pope Benedict XVI.

Little Ethereal Journey # 39. Golden copper sheets, burgundy tissue paper + Indian stamp with orange and green pigment, quadrilobes hand painted, with a brush, with white marble powder, burgundy red pigments, dried leaves of Immortelles. 27cm x 22cm. 2017. This painting recalls the plant and medicinal herbs studied by Hildegard and the place she gave them in life. It is the only painting for which there has been no musical meditation but, as with all “Ethereal Travels”, a meditation on inner silence and its “vibrational song”.

A very great scholar, inspired and curious to understand the why and the how of the elements that constitute man, nature and the universe, she put in writing her research and her reflections inspired and nourished also by the works and research of great ancient and Arab physicians and philosophers. Her double gift of clairvoyance and healer made her one of the most renowned doctors of her time. Her medicine combined the expert elements of great authors along with the local knowledge of folk medicine.

On nature is the work in which she listed and described nearly 300 plants, 61 varieties of birds and other flying animals and 41 kinds of mammals, according to her own observations and this for therapeutic purposes. She indicated there the remedies that can be made from each plant or organ of animals. Hildegard Von Bingen is considered the first naturalist in Germany and some today see her as an early naturopath and are inspired by her writings and her advice and recipes.

Causes and Remedies is a manuscript on the causes of diseases and the remedies to use. Her reflection on the human body, on psychology and sexuality was very modern for the time, and she was particularly interested in the female body and its suffering related to childbirth, periods, cycles… To remedy it, she published recipes that are supposed to alleviate the pains of women.

Although some of her practices were unfounded and based more on beliefs, she also had intuitive statements which will prove to be true later on, as on human physiology – the blood circulates in the body – or in another scientific domain, that the earth revolves around the sun placed in the center of the world and that the fixed stars are in motion.

She is also credited with drawings and paintings, which illustrate her manuscripts. To these three manuscripts is added the one entitled “Scivias” (from Latin: sci vias Dei, “know the ways of God”), in which she carried over from her forty-third year all the visions she had had since her early childhood. It is the first work she wrote between 1141 and 1151. She will write the others between 1158 and 1173.

A creative nun sensitive to the arts, uncompromising with her faith and her spiritual convictions, it is through her poetic writings and her musical creations that she expressed with the most passion and originality her love for God, the greatness and the delicacy of her faith.

Hildegard Von Bingen wrote many poems or poetic texts and she did so with a freedom and a sensitivity that belonged only to her and that lived up to her “Passionate Faith”. In some of her texts, through the advice she gives, we find the woman of altruistic faith turned towards others, concerned about their physical and moral well-being. In other writings, more surprising for the time, like this poem below to the glory of the Virgin Mary, she expressed herself with a sensitive and sensual vocabulary, in terms of carnal love, which is not common to talk about this sacred and religious topic:

O most beautiful and sweetest,
How God was taking great delight in you
When he placed the embrace of his own warmth in you,
So that his son was nursed by you.
For your belly bore joy,
When every heavenly harmony about you resounded,
Because, Virgin, you have carried the Son of God.

Added to her talent as a poet is that of a composer. Between 1151 and 1158, she composed musical scores intended to be sung by the Sisters of her convent during religious ceremonies. These sung compositions were accompanied by musical instruments, while their use was not tolerated during worship by Catholic authorities of that time. This translates well her independence and her will to live her spirituality according to her sensitivity and to do it with truth and freedom by associating with it the delicacy and the beauty of the arts. She composed 77 liturgical pieces. It should also be noted that at that time women were not allowed to sing in churches, except for the nuns, but this did not necessarily concern all monasteries and convents.

Some of the songs she composed are sung a capella by a female choir and a soloist. Soft and light voices that evaporate like a silky veil while rising in the air. Slow rhythms with round and enveloping tones, sometimes sweet. The resonance of these female voices which are expressed in canon in the choir of the church makes us aware of the dimension of silence that reigns in these spiritual places, infinite silence conducive to meditation and prayer. A silence that punctuates their days, whether they sing, work, or pray; it accompanies each act of their daily life, each moment that connects them to God through their vows and their love. I think that this silence is one of the doors that lead to the inner silence that we can feel in us at certain moments of our existence, that imposes itself on us or that we seek voluntarily.

We reach this inner silence when we descend into ourselves, in order to isolate ourselves from the noise pollution of the outside ambient world in order to refocus on our own energy.

It’s a good way to rejuvenate, finding in us a peace, a serenity that allows us to be in tune with our vital energy. Meditation can help us reach it, like a prayer which is very similar. It is all about concentrating and at the same time completely letting go of everything that connects us emotionally with our environment.

In fact, I think that when we are focused on an activity that we are passionate about, at the moment when our whole being, both spiritually, physically and intellectually, is fully and entirely focused on the exercise of this very activity, we sometimes reach (consciously or unconsciously) this inner silence. Whether this activity is a prayer, biological or astronomical research, an artistic one, as Hildegard Von Bingen could do, when our energy is 100% dedicated to this activity, we are one with it, and in this state of concentration and at the same time of letting go, and of “quasi fusion”, we can access this inner silence.

To reach this inner silence is to access within us diffuse and infinite energies which connect us to all the other energies of the universe, whatever they may be. We feel that we are an integral part of all these energies and yet we feel that each of them is different from the others, including ours. And according to the place in which we live this experience of inner silence, we would not feel the same energies and their resonances would be of different nature and quality, in the sense that some would be more present or stronger than others.

By reaching this inner silence, we are nothing but energy and all our senses are increased tenfold to the point that we reconnect with our 6th sense; our intuitive sense, because we feel the energies external to ourselves and receive and understand them in a sensory way. We no longer apprehend everything around us with our intellect but with our senses on an energetic level. It’s as if we hear, see, taste, smell and touch with this sixth sense. Any understanding of the energies which pass by us as well as the messages which they carry are decrypted by this 6th sense. Our whole being works in sensory mode. 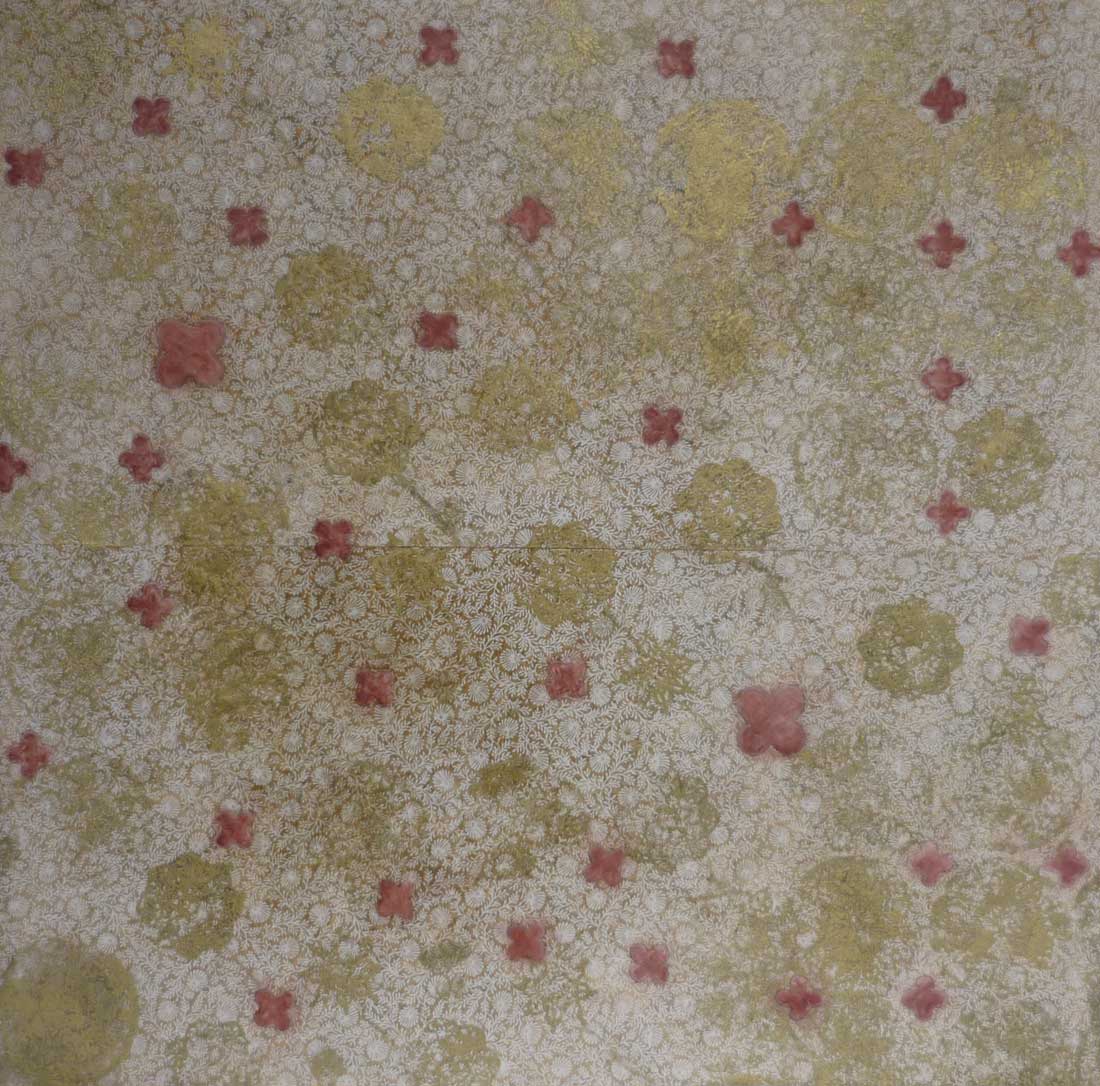 When we reach this inner silence, we not only feel an infinite serenity, but also a feeling of infinite space which we are an integral part of, as if the physical barrier of our carnal envelope no longer existed. All is but energies circulating through materials and thus creating an energetic link – even energetic links – with everything around us. We are here and now, we are in the truth of the moment.