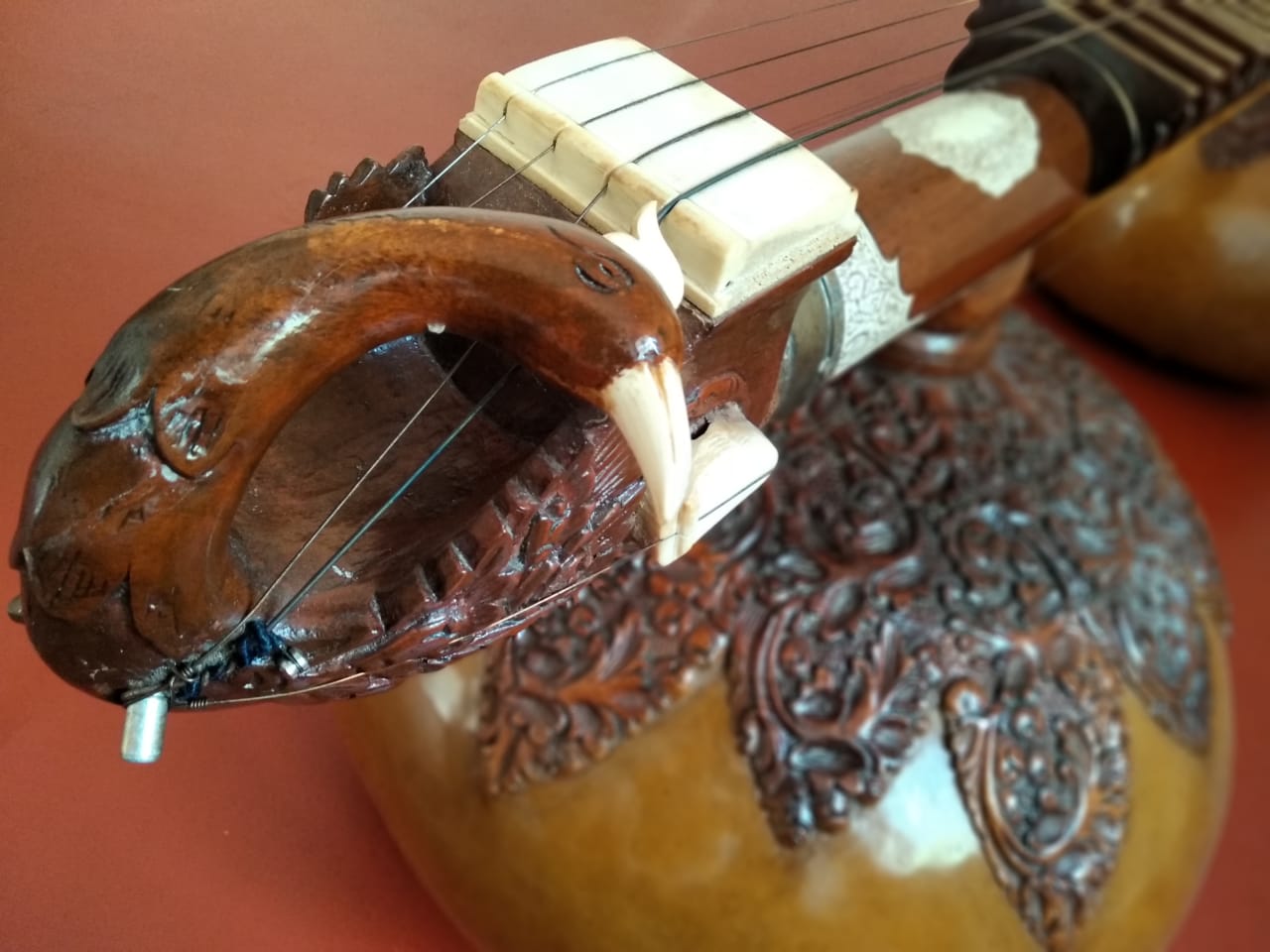 An instrument to purify the mind and elevate the soul.

Considered as the mother of all Indian string instruments, the Rudra Veena consists of a long tube generally made out of teak wood with two big resonance gourds (called Tumba) at each extremity that amplify the sound. Rudra means “the roarer” and Veena “stringed instrument”. According to mythology, the Rudra Veena was created by Lord Shiva: he was contemplating the perfection of his wife Parvati who was lying down. As a commemoration of her beauty, the instrument can be seen as a string body resting on two gourds. Saraswati, the goddess of Music, Art and Wisdom is visualised as holding a Veena in her hands. 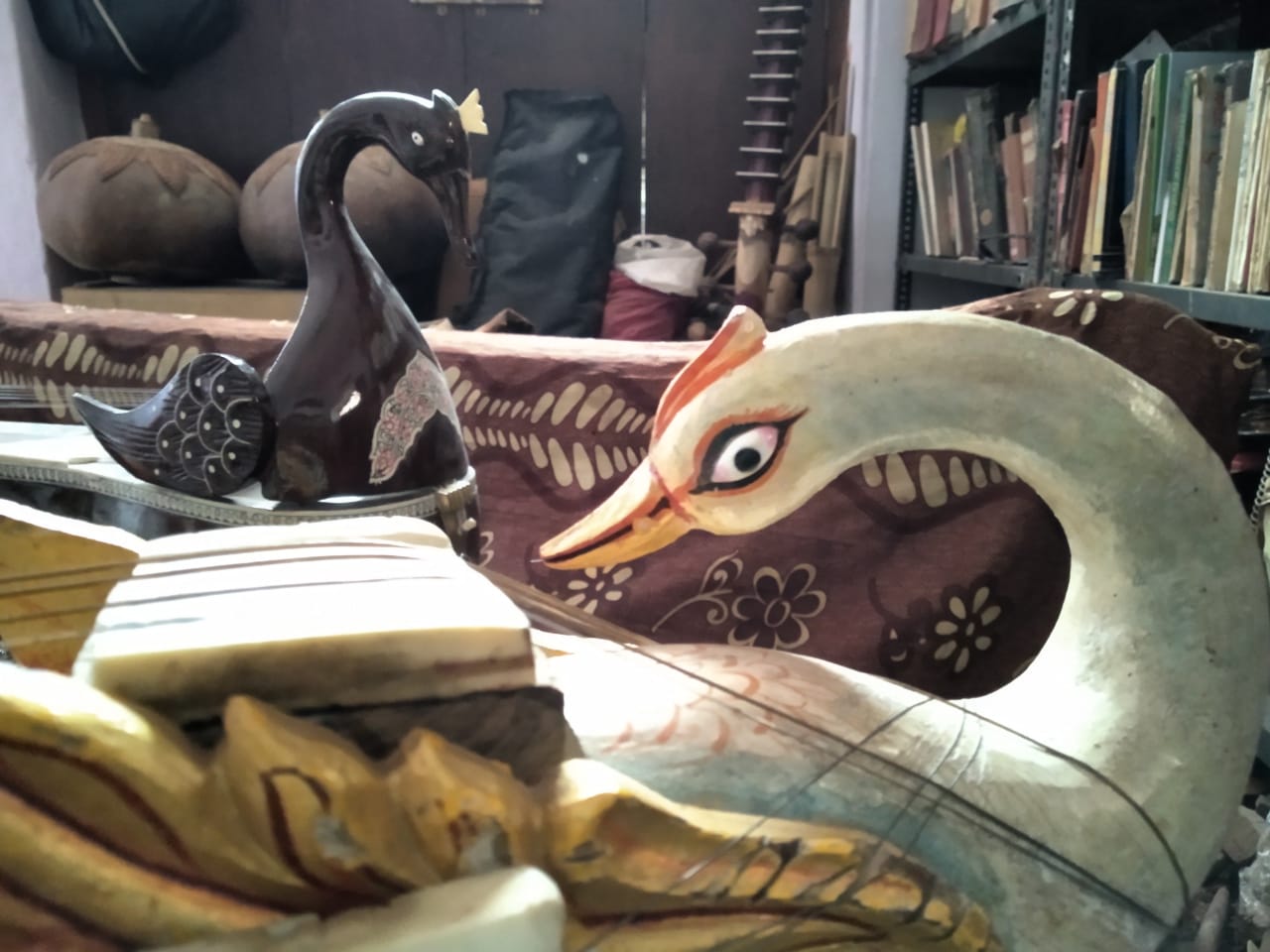 The Veena has some very meaningful decoration : a dragon or snake, symbol of Shiva, at the peg, and at the bridge, a peacock, symbol of Parvati. The instrument requires a perfect balance between masculine and feminine energy: the musician has to find the power of Shiva, especially to pull the strings, as well as the delicacy of Parvati. 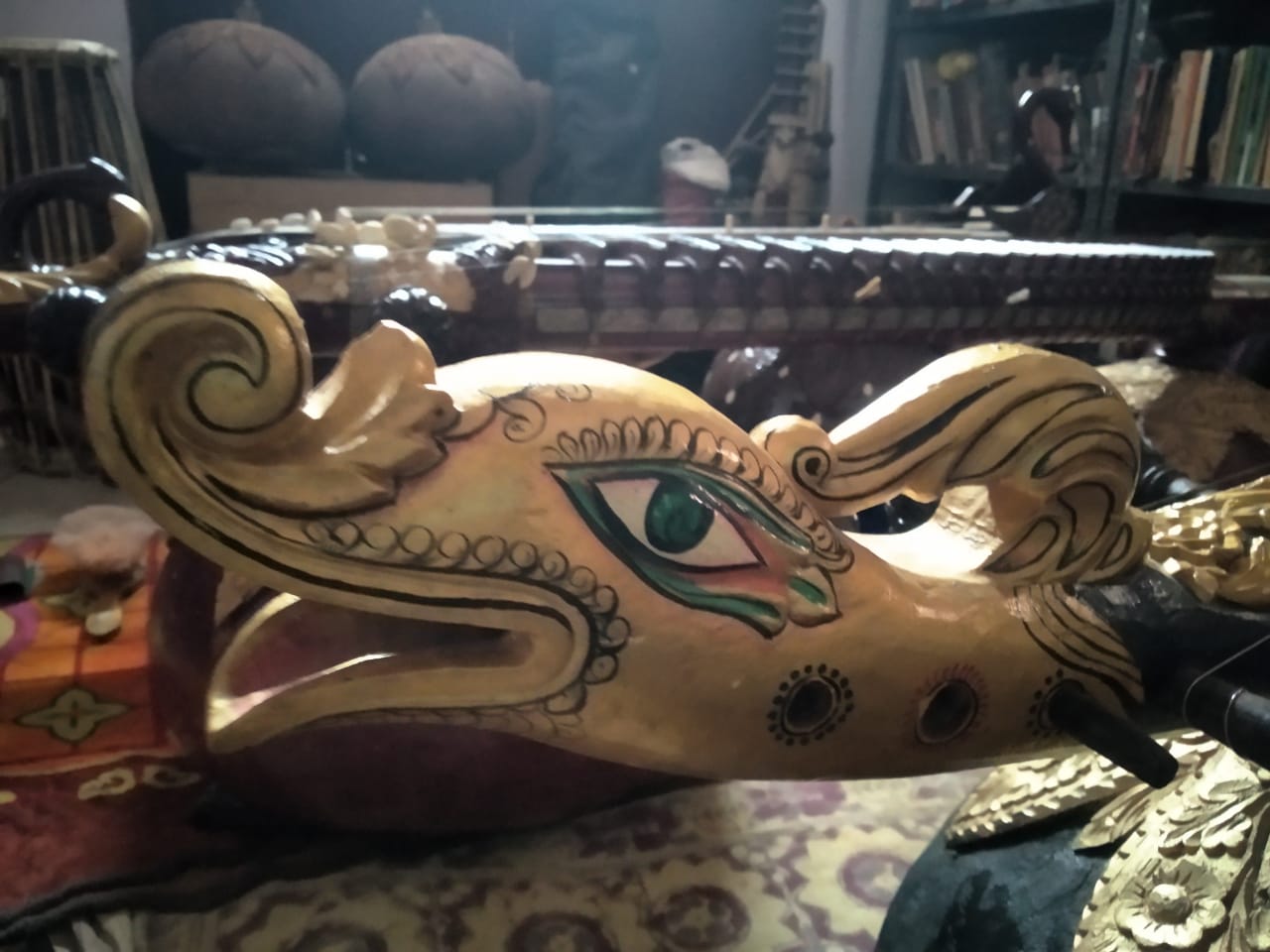 It is considered as a mystic instrument, very much connected with yogis and ascetics for its power to purify the mind and elevate the soul. Firstly, the musician is in the middle of a vibrational field tremendously favourable towards meditation. But the Veena was also used by the yogis who played one note with it to support their chants in the vedic era. At that time, the instrument was played in a very technical way that the moghols made, later on, more subtle by bringing the refinement of the islamic culture as well as its emotional aspect. 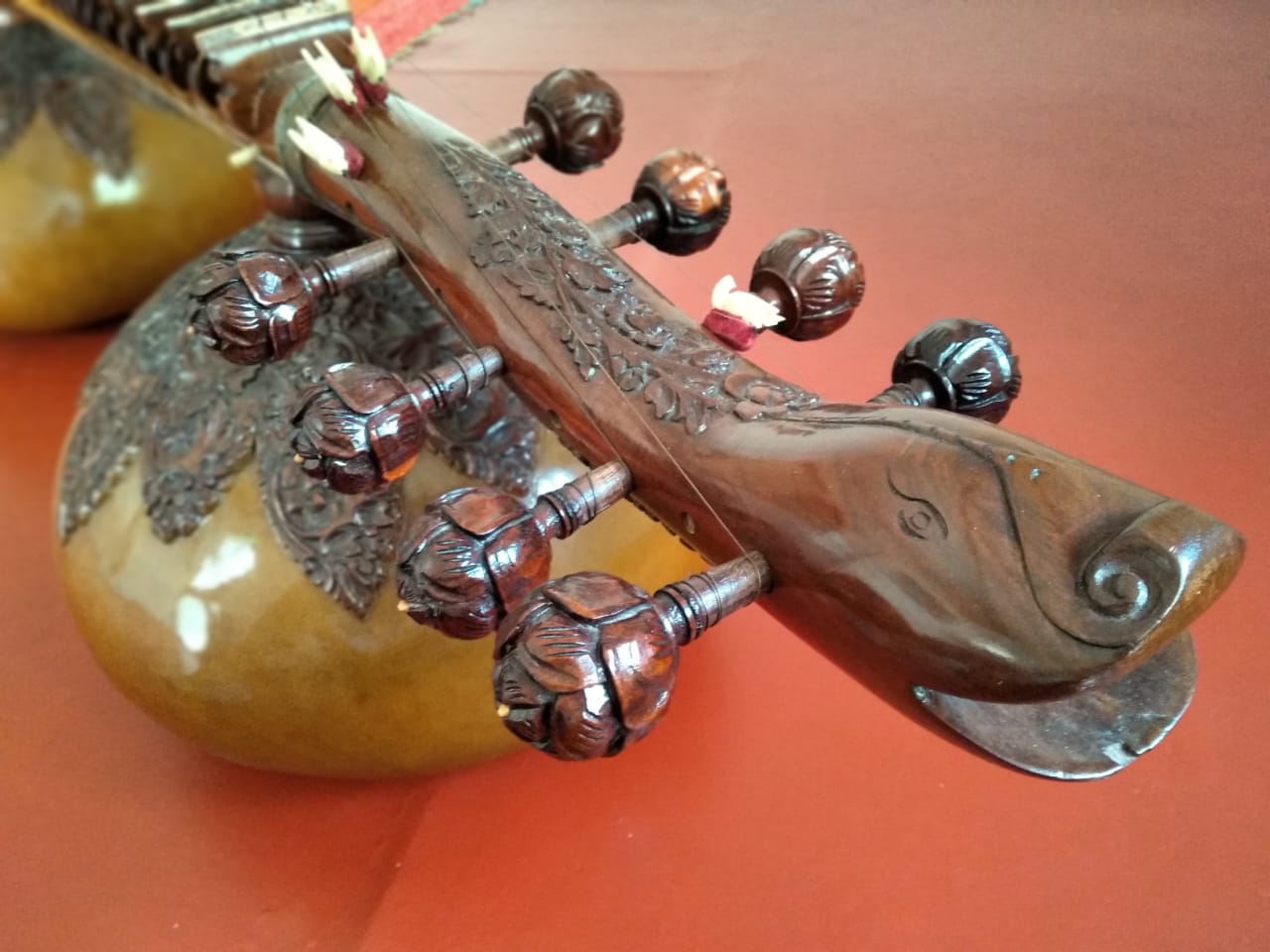 In its actual shape, the Rudra Veena dates from around the 16th century. At this time it was one of the most important melody instruments of the aristocratic court. The Rudra Veena is played in the ancient musical style of Dhrupad, the North India’s oldest classical music tradition. Dhrupad originates in the chants of Vedic hymns and, as a vocal music tradition, it developed primarily into devotional temple songs. The Veena became the main solo instrument of this style and evolved later into a classical art form on its own. For a long time, there was no passing down to outside families: the father taught his sons but didn’t allow any other student. However, teaching the style was possible on another instrument, the Surbahar – a bass sitar. This can be understood having in mind the Rudra Veena’s connection to Shiva, which makes it particularly powerful, and required precaution.

Since the 19th century, this instrument has less interest due to the rise of Sitar or Sarod more popular for their virtuosity and demonstrative component. Despite the austerity of the Veena, which needs to be mastered, it still attracts some musicians from all countries, seeking artistic and spiritual exploration.

Traditionally the Rudra Veena is held diagonally. The upper gourd rests on the left shoulder and the lower gourd on the right thigh of the musician. Recently, the instrument has been modified to offer more resonance with a bigger gourd, and is held horizontally in that case.The Veena is played with the index and middle finger for the high-pitched string, and the ring finger for the three bass strings, while the pinky finger’s nail flicks the side drone strings (4). From as low as the piano goes to a quite high pitched sound, this instrument spreads over 4 octaves.

More than only a mood, the Raga is considered as an individual, whose personality the musician explores. It is depicted in miniature paintings. 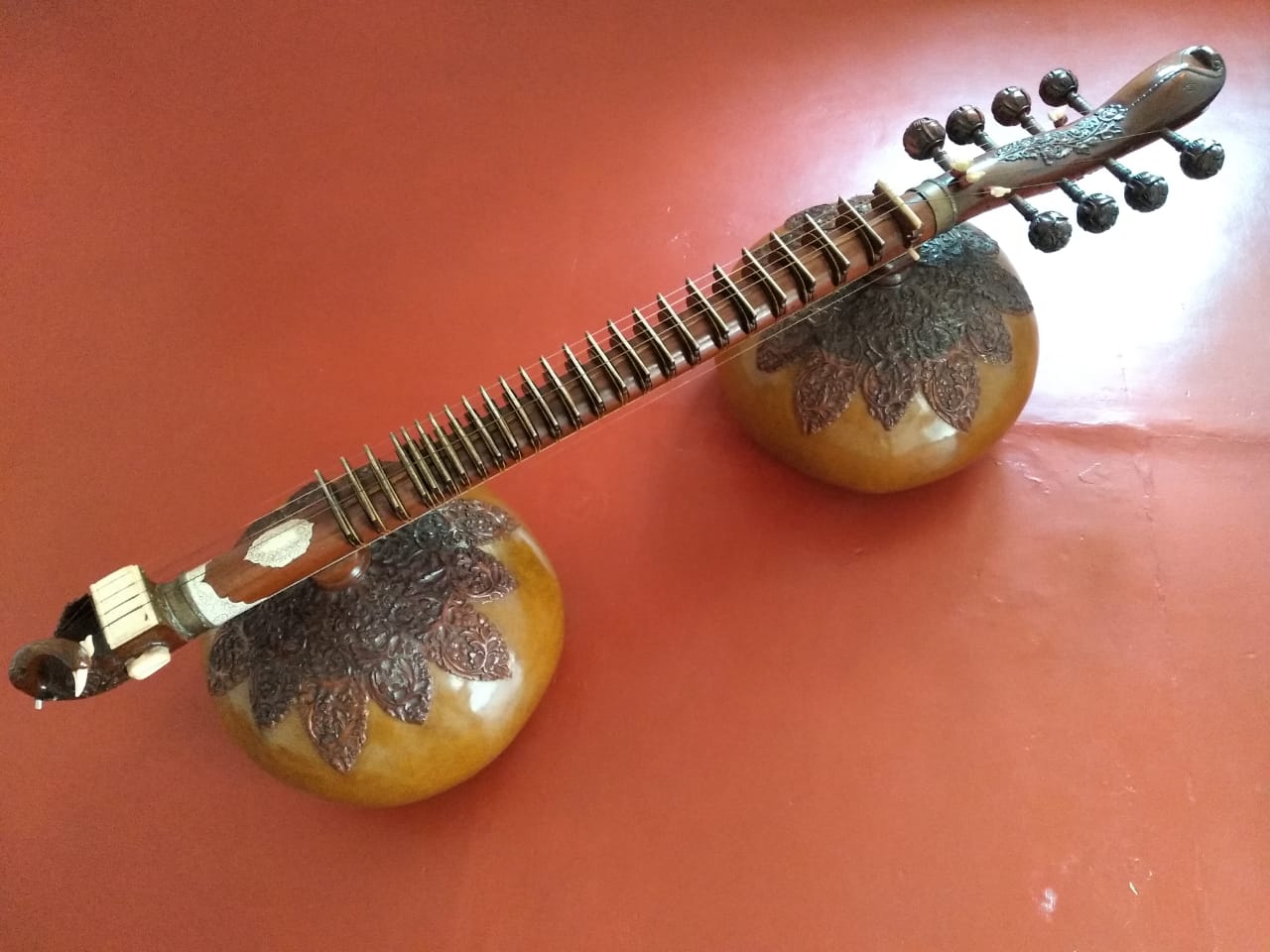 The Alap is the introduction part which presents the relationship between the notes, in a slow tempo. It consists of three parts : the Alap, unmetered, builds up for the presentation of this relationship. The second part – Jor – is a conversation and a dance on the frets. The last one, Jhala, is short and presents the raga in a faster tempo. It is, in the background, always accompanied by a lute instrument, the Tanpura: tan means music and pura means filling. Hence, this bourdon is what feeds the musician with music. The two instruments can be tuned in height and harmonics, this allows the player to, literally, connects with the harmonics, to let himself be filled with them and be led to wherever the notes take him.

This Chandrakauns is a night Raga, intended for the period of time between midnight and 3 o’clock in the morning. Chandra means moon. This track is an exploration by Glenn Louvet, on the special occasion of Buddha Purnima 2020.