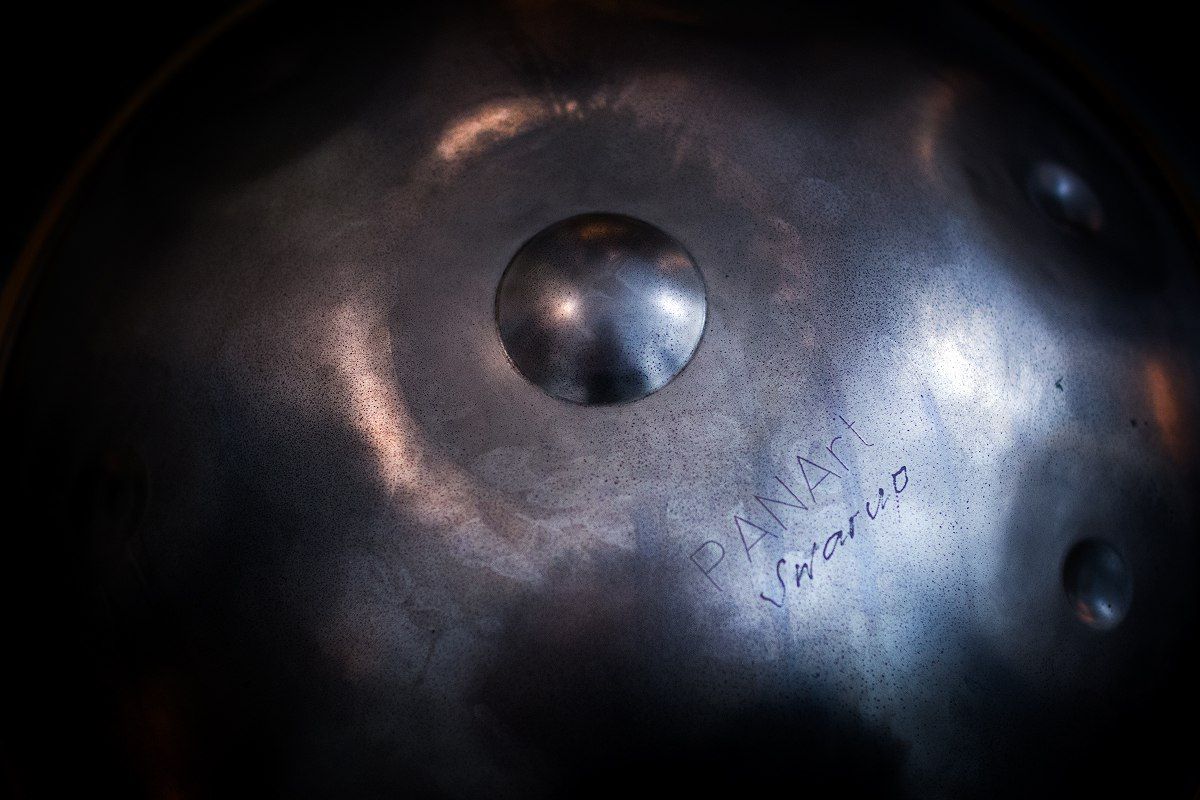 Davide Swarup is often said to be a « soul player ». As a hang musician, a very unique one, he inspires and blows the mind away from thoughts or mental mechanisms.

Listening to his melodies is a way of meditating. Davide himself plays in a meditative state, allowing the music to come to him, without the ego or any kind of control interfering. The energy just flows through him, as if channelled: his compositions come to him from somewhere out there and make them so special. Body, hands and fingers, so relaxed and smooth, become the translation of a beyond as well as the pure expression of the here and now. Through improvisation, the present moment reveals itself in all its beauty. One of Davide’s favorite sentences is: “let’s see what happens”. This very “happening” is really what can be heard in his hang music, as a way to enhance each and every moment that comes and goes. Davide enables us to listen to the power of mindfulness, to the inner freedom from which life just expresses itself.

Attending Davide Swarup’s concert has something very special: one can witness and feel the subtle and invisible energy coming along with the vibrations of his Hang. The musician seems to be a channel for the divine to be heard, speaking to our heart and to a deeper part of ourselves. Touching this very inner space, this music makes it move and beat.

One of the most common reactions when people hear him playing for the first time is to stop. While busking, Davide has often seen passers-by walk past him, then suddenly stop and go back: to listen. Something, an inner and thirsty room in the soul, holds them and craves his music. To let go, to soothe, to synchronise.

The beauty of the Hang sound and its frequencies indeed convey a strong feeling of inner harmony, even stronger thanks to the deep symbiosis Davide is in with his instrument.

For Davide’s part, things are very simple. As he says, “I just play what I love”.

This, we can definitely hear.

Created in January 2000 by the tuners of PANArt in Bern, Switzerland, the Hang is the son of the steel pan – or steel drum – that was born after World War II when the British and American navies left thousands of oil barrels on the Trinidad. At first, the steel pan was a rhythmic instrument; after local musicians had discovered how to condition the metal and tune the playing surface into note area, the steel pan became a melodious instrument. PANArt’s intensive researches with physicists, engineers, metallurgists, and ethnomusicologists on its acoustics over twenty-five years resulted in the hang, born from a marriage between art and science and studies on gongs, bells, drums, bars, plates and shells. The Hang takes its name from a Bernese word meaning “hand”: here is the huge originality of this drum, played with hands.

This instrument in itself is a small monument, worthy of the architecture of such shell constructions as the Catalan roof of Gaudi’s cathedral and tuned as a sounding sculpture. The aim was to create an instrument that would give a huge artistic freedom to the player. PANArt studied the resonance of the Hang played on the lap inside a sort of acoustical cathedral to settle the palette of intervals. Tuning hang – to set its form, to smooth, peen or stretch the metal, check symmetry and vibration – is an art.
Prospective owners had to go in person – by invitation only – to the PANArt workshop in Berne to get their Hang and to apply by specifying their motivation on a proper letter. Despite an ever-increasing demand, and after making around 7000 instruments, PANArt decided to stop producing the Hang in 2013. Others have taken the helm.

More than five thousand Hang players can be counted worldwide, which shows the deep resonance this instrument has with individuals. The Hang is considered to have healing properties – arterial blood slows down, pain is released – and its sound is often said to be magical.