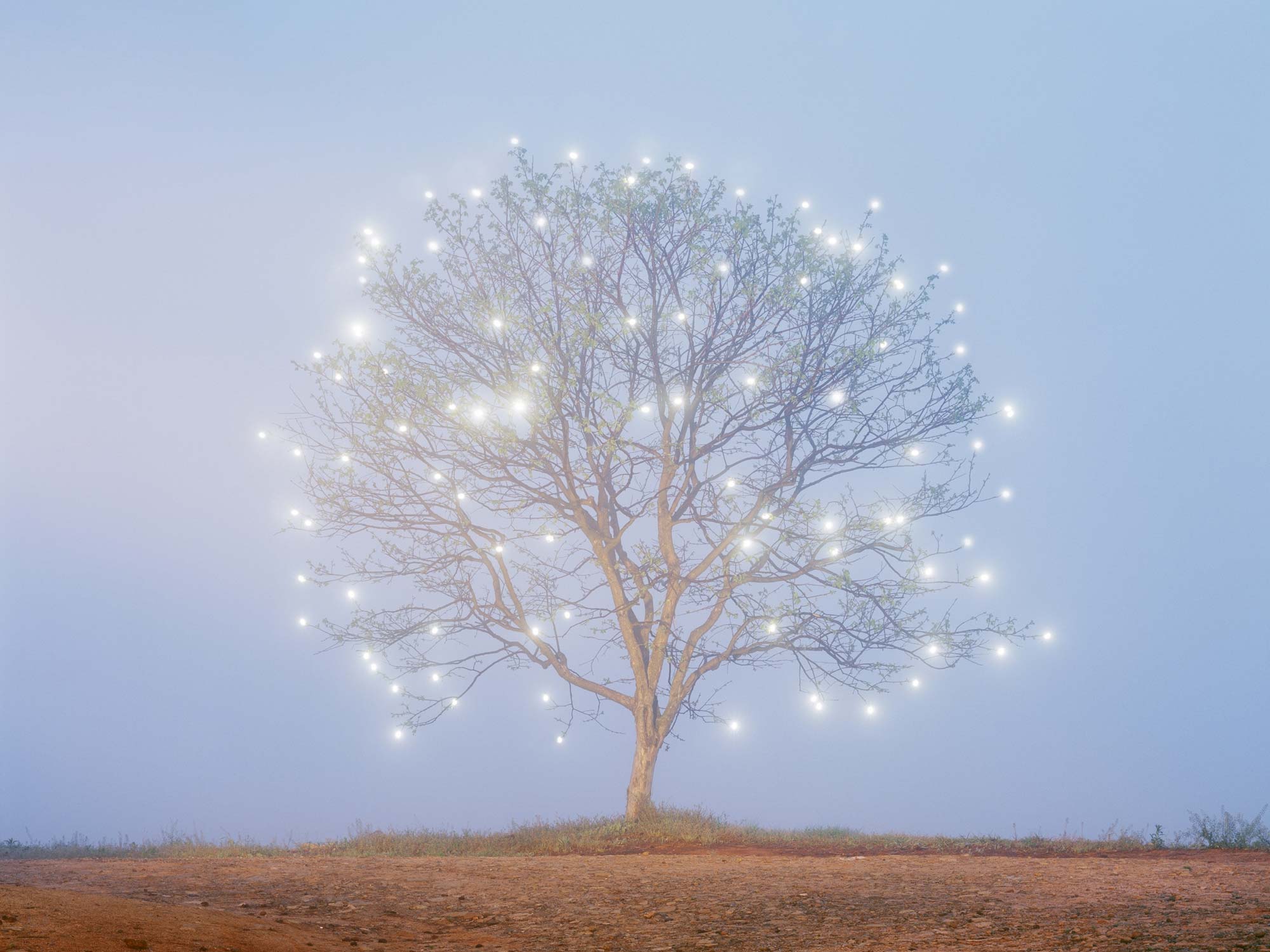 Lee Jeonglok’s Tree of Life is an ode to this very energy we all share with nature.

The Tree of Life series began in the winter of 2006 with what would appear later as an intuition.

“It was a freezing winter with bitter winds, Lee Jeonglok explains. I saw a glimpse of green at the tip of a bare branch. “Did I really see it then?” Whatever it might have been that I saw, a seed of life must have been embedded inside that dry branch devoid of vitality, like all the trees that have to endure the long, barren winter. Although not clearly visible, it is without doubt that this vitality exists. This is not the only invisible thing that exists in this world! This was a kind of awakening. Awareness of something that exists in spite of its invisibility.

Invisible yet they exist, interacting with the visible world. They correspond to each other. I wanted to express this in my work. I struggled to find a way to express the vitality dormant in a dry branch. Going through a series of experiments, I began to use light. Light was the most appropriate medium to express the vitality that I discerned. Moreover, the sublimity of light is a universal archetype of mankind like the numinous character of trees. My work began from here”. 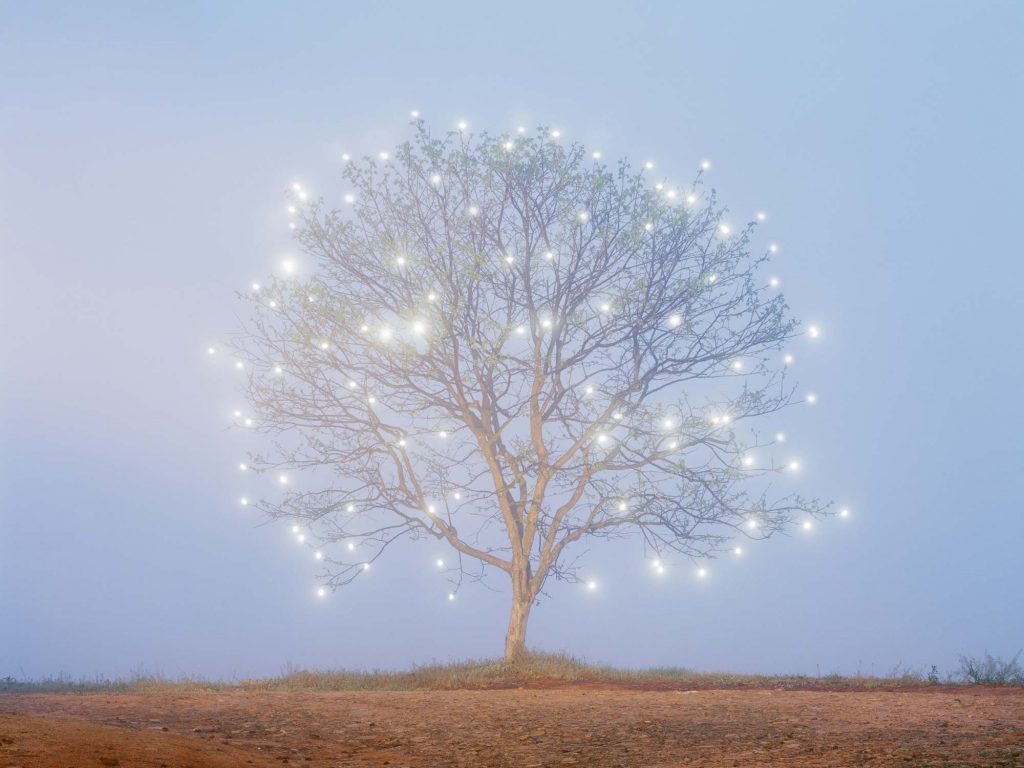 This work with light is done in an intimate connection with the very being of the tree.

The fascinating value of this artwork springs from the fact that the artist doesn’t modify or add anything to what is already there, on the contrary all his talent consists in deeply respecting the genuine nature of a tree, that he gets to know through a particular sensibility. Indeed, as Lee Jeonglok states:

“A tree of life’s light does not illuminate the world or the outside of the tree. Instead, it reveals the interior space, the aura of existence. For this reason, I wanted that light to be subtle, not so spectacular. As experiments continued, the work process for the Tree of Life series has become stabilized. As the background was transferred from a natural setting to a stage, it became more dramatic with the aura of the tree of life further intensified.”

The process of creation was offering a wealth of learning opportunities and allows the artist to go deeper in the vibrant life within the trees:

“I needed to handle three different lights – natural light, flashlight and searchlight – for this series of work. In addition to trees, other props were required and many different kinds of films were needed for changing light and atmosphere of each day. It was impossible to control random outdoor situations that I had to face daily. It was not uncommon that outdoor sets that were built for several months would be destroyed by worsening weather conditions.

The second Tree of Life series was made in an indoor studio. After having gone through a tiresome three-month test period inside the studio, valid data began to be accumulated. It took more than four years to learn how to control the light in Trees of Life.

As I learned to manipulate variations of light to some degree, I wanted to see what kind of effects would be created when a tree of life meets nature full of vitality. Searching for a site that cherishes the deep echoes of nature, I arrived at Jeju Island. I was awestruck standing in front of Jeju’s unique and alien nature that is extremely vibrant, almost fearsome. It took two months before I was able to set up my camera in front of this primordial nature that exceeds any interpretation. I found a tree that resembles Jeju Island and worked at seashores, farms, or forests imbued with special inspirations. Although my long indoor experience enabled me to handle flashlight skillfully, outdoor photography was still a huge challenge. At least a week’s work was required just to obtain basic data from a site. Jeju’s windy and capricious weather was never predictable and films needed to be sent back by air for development.

A tree of life that has emerged in the world again is a gate that connects the visible and invisible worlds or the chasm between them. Light stands for the communion between the visible and invisible worlds. The tree of life symbolises the interaction between these two different worlds as it is. Our industrialised contemporary society is laden with various stimulations that make us oblivious of life’s fundamental source. I wanted to create a site where the vitality of nature and the substantial world embedded in us meet. Beyond a mere communication with nature, I hope we will be reminded of the waves from the invisible world that have always been influencing our life and history”.

At the Phillips Auction held in London on the 18th of May, this work titled “Tree of life #1” was awarded at GBP 22,500 which is more than 3 times the price of the work. Works from ‘Tree of Life’ series are held at the Korean National Museum of Modern and Contemporary Art, Seoul; Gwangju Museum of Art, Gwangju; Daelim Museum, Seoul; and Ilmin Museum of Art, Seoul.